You are here: Home » The lovely art 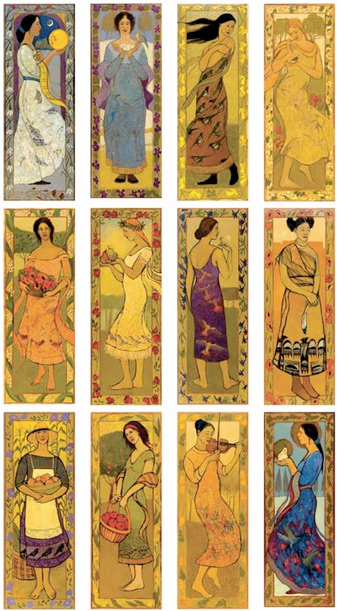 We have always loved Kathy’s art. Our favorites are the moon women of the months… bold and noble while still being earthy and authentic. We approached her with a “why not ask?” kind of Hail Mary and Kathy met us with more graciousness than we ever imagined. She believed in the book maybe even more than we did. While we slaved over word choices, she went to work painting the gorgeous works you now see. We had no guarantee of a contract or any way she would be compensated for her work—but she still trusted in the need for the book enough to get started.

We knew we loved her art, but we had no idea the wisdom and strength of her ideas that she would offer the project. We remain in her debt.

A very satisfying conclusion to this leap of faith is that eleven of the paintings from the book have been acquired by the LDS Church. We are eager to see what they do with them!

If you also love her work, you can order canvas prints, a calendar and other items at our etsy store:
https://www.etsy.com/shop/GirlsWhoChooseGod

One note: Kathy also sells the original remaining art.
If you would like to get a quote from her about one of the pieces in the book or her other work, please contact Kathy at “Kbpeterson1 @ gmail.com”

An interview with Kathleen Peterson 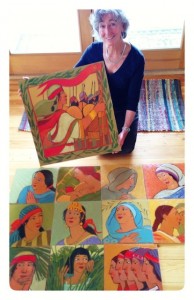 Kathleen Peterson was born the third child of a third child to schoolteacher parents. Raised with the idea that the best education is travel, she has lived in the Virgin Islands, Malaysia and Hawaii and traveled throughout Southeast Asia and Central America.

As an artist she is continually learning, painting with oils and watercolors, illustrating books, making batiks and building clay figures. She and her husband have four grown children and now live on a farm in Spring City in the Sanpete Valley with two horses, twelve chickens, two barn cats, four ducks, and Pete the Dog. Her work can be found here and you can watch a short video about her here.

How did you get involved with Girls Who Choose God?

Bethany and McArthur had written the text and were looking for someone to illustrate the book. Bethany was a friend of one of my daughters in college. She knew I was a painter; and so even though she didn’t know me, and it was twenty years after college, she asked my daughter for an introduction. When Bethany called, she said, “We have big dreams! We’ve written a book and now we need an illustrator and a publisher.” I was interested in both the topic and the book and immediately agreed to be part of it. I suggested Deseret Book as the publisher because I had worked with them and they knew me.

I was happy to see a book highlighting women’s strengths. It is important women realize the power we can have over ourselves. I liked the way Bethany and McArthur framed these familiar stories, showing a choice each woman makes that significantly affects not only her own life but the lives of those around them. This book can help girls recognize their own power to choose.

How did you decide how to represent these 11 women from the Bible? It’s not like there are historical references to draw from.

I read the text that McArthur and Bethany sent, of course. But I also re-read all the Bible passages that tell about the women and then as I painted I focused mostly what I felt and understood about the women from my reading.

I painted my impressions of each woman. Not so much what she looked like but what kind of person she might have been. I tried to capture my sense of her and often the physical representation is secondary to the feeling. It’s hard to explain— that’s why I paint instead of articulate. [Smiles]

Which woman did you paint first?

I painted Eve first. I hadn’t painted any of the other Bible women before but I had painted five or six Eves previously. The Eve in this book has red hair, which was a conscious decision on my part. I don’t know that Eve was red-haired but I knew many of the other women in the book would be dark haired and I need her to be different.

Eve is a heroine to me. She figured it out. She knew the consequences and wanted to experience mortality, and being a mother, and the happiness and sadness and all of it. She took the fruit and so Adam did too. That might be a pomegranate she is holding.

 Tell me more about the process you followed for painting this book. For example, did you paint all the women in order? Did you work on one painting at a time? 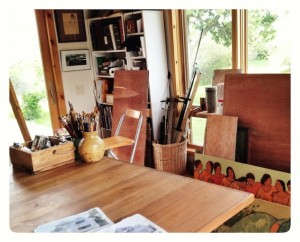 Generally I worked on several paintings concurrently. Partly because I layer the oil paint and it needs time to dry between layers, so working on several at once is practical.

Were any women easier or more difficult for you to paint than others?

It was very easy to paint Mary, the mother of Jesus. I love her. She was an amazing woman who had tender feelings. I imagine her as young, spiritual, very beautiful inside – you’d have to be in order to be the mother of Jesus, right?

Originally, I painted the Eve group scene as Eve sitting with two children. But then I decided I wanted to portray her as working instead of sitting around, so I painted a new scene. Now they’re shown working in a garden. Do you like to garden? I do, I love it.

Any favorites among the 11 women?

Mary, the mother of Jesus. I always wanted to be Mary in the nativity plays when I was a kid. I never was! [Laughs]. I love thinking about who she must have been. And Mary Magdalene – my impression is that she made a big change when she met Jesus. I admire him for including so many women in his life and giving them importance.

I notice from your previous work that women feature a lot in your paintings.

Well, I like to paint women because they’re more beautiful! [Laughs]

All the paintings except the portraits have borders. Are they symbolic?

I do include symbols in my paintings, items that represent a theme or feeling in the painting. They are especially obvious in the borders. I use a lot of imagination. I also use Google. For example, Esther lived in present-day Persia so for the border around the landscape painting, I researched Persian rug designs and incorporated one into the border. I used the royal colors of purple and gold since she was a queen. For the Miriam group scene, you’ll notice hieroglyphics in the border: they spell M-I-R-I-A-M. And in the Mary and Martha group scene, I included household items in the border to highlight Martha’s role. I’m kind of partial to Martha. [Smiles] Every border is symbolic in some way that refers to the time or place or theme.

 Girls Who Choose God is a children’s book. Did you paint specifically with children in mind? 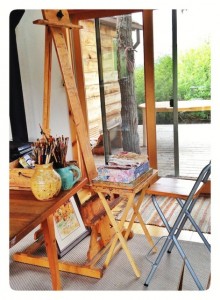 Yes. When I used to read to my kids, I would look for elements to point out, colors and patterns. I looked for stuff to talk about besides just the text. So in this book,

I included elements in the paintings that can appeal to children. Depending on the age of the child, sometimes they can’t completely understand the story or stay focused on it. But they will find the bird in the background, or count the number of brooms and dustpans in the border of the Mary and Martha painting. I was conscious of including elements like this in the paintings so that they would speak to various ages of children. It gives the adult reader other things to talk about with the child besides the text.

What medium did you use?

These paintings are oil on mahogany board. The portraits of the women are all 12” square. The group scenes are 24” square. The settings – the paintings that depict the landscape or the scene – are 12×24.

How long did it take to do the paintings?

It took about six months of steady work. There are 34 in all, three for each of the eleven women, plus the extra Eve group scene I painted which is now featured on the back page.

What happens to the paintings now?

The LDS Church has offered to purchase the group scene paintings but the women’s portraits and the rectangular paintings I am hoping to sell.

Let’s talk a little bit about your other illustration work. When did you first start illustrating books?

The first book I illustrated was The Stones of the Temple written by Fred Voros. Pat Bagley invited me to illustrate the text and then he published it.

And you did several other books after that?

Yes. I did a series of seven books with Carol Lynn Pearson with different titles that look like children’s books but are really for grownups and are all fables for our times. Also, I illustrated three books for a Hawaiian publisher. I think my favorite book I’ve worked on is A World of Faith.

Tell me about that book.

It was my second book. Pat and I had the idea to do an A to Z type book. Are you familiar with Ashanti to Zulu? I wanted to do a nice picture book with something to learn and lots to look at on each page. Pat came up with the idea of a book of world religions and introduced me to Peggy Fletcher Stack, a religion columnist and very knowledgeable writer, from the Salt Lake Tribune. Peggy selected 28 world religions that an American child might encounter in the U.S. and we got to work. I learned so much from my work on the illustrations. It was amazing to me how mostreligions are built on the same concept of a belief in a higher power and belief in ethical behavior towards others.

By the time we finished the writing and the art, Pat’s publishing company was no more so we had to scramble to find a publisher who would take on a book about religions. Finally Signature Books agreed to do it, though we had to publicize the book ourselves. We spent a lot of time in bookstores signing and talking about the book to youth groups and schools.

There was an initial splash but it fell off the radar until 2002. That was the year Salt Lake City hosted the winter Olympics. The Interfaith Round table of the Olympic Committee decided to gift it to all the visiting country delegations. That was exciting. The book was reissued and one thing I was happy about was they used the square format originally envisioned for the book. The original publication had used a more traditional 11 x 13 format common for children’s books.

What’s next for you?

I am always painting on my own work, but if this book sells well, we will possibly being doing another book about women in the scriptures or Church history.

Thank you so much for your time.